Hi everyone – time for another reveal for Child’s Play Challenge.  This time we were asked to create a layout based on the toy hot wheels.  I have loads of pictures of my son playing with his hot wheels, and even one of him trying to share his apple slices with every truck he owns, but what really hit me was him getting his new balance bike…graduating from a tricycle to two wheels.
I worked with the week one sketch from Let’s Get Sketchy as the three photos inspired me, as well as the simplicity of the rest of the sketch.  I really allowed me to embellish as I chose.
I have had the Boy Crazy collection from My Minds Eye in my stash since maybe April waiting for just the right layout to cut it up.  With the large bicycle sticker…it was just the time.  I chose the star paper for the focus piece since the circles mimicked wheels.  I just layered everything from there. 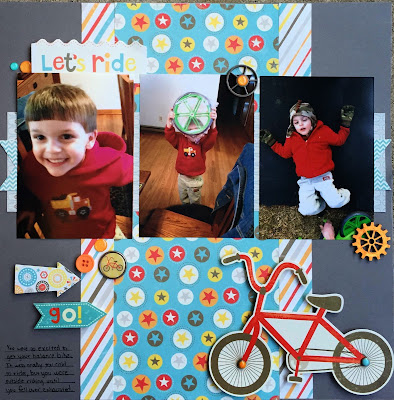