I originally printed this photo for my 2014 December daily, but decided to make it it’s own layout because of the story behind it.  I’ve obviously been holding onto it for some time, but I needed to have the perfect paper, since most of my sash is boy themed, and a great sketch.  That finally happened when I received my October creative kit from My Creative Scrapbook and say the November week 2 sketch over at Let’s Get Sketchy.
The papers are from the Echo Park Story of Our Family Collection that came in the kit. I added some modeling paste mixed with Heidi Shine, and put through a Heidi Swapp stencil as well.  The title is an old pack of Thickers that I’ve had for ages. 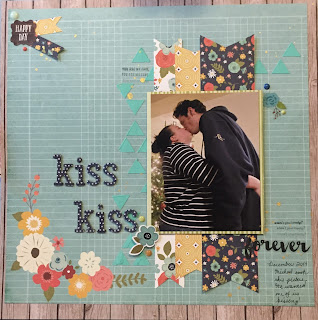 Now for the story behind the layout.  Last year our son, who was four at the time, started getting camera obsessed.  Rather than be in the pictures he always wanted to take them.  While I was taking pictures of us putting up the Christmas tree he asked if he could take some.  With digital pictures I figured it didn’t hurt to say yes.  He says…I want to take a picture of you and Daddy kissing…umm ok…I figured we’d end up with chopped off heads to be out of focus – etc.  Nope – he got a perfect shot.  I know adults who have had trouble getting us in the same photo since there is a foot difference between us!  Needless to say…a camera was on his Christmas list last year!
***This most may contain affiliate links
Pin
Share
Tweet

This website uses cookies to improve your experience while you navigate through the website. Out of these, the cookies that are categorized as necessary are stored on your browser as they are essential for the working of basic functionalities of the website. We also use third-party cookies that help us analyze and understand how you use this website. These cookies will be stored in your browser only with your consent. You also have the option to opt-out of these cookies. But opting out of some of these cookies may affect your browsing experience.
Necessary Always Enabled

Any cookies that may not be particularly necessary for the website to function and is used specifically to collect user personal data via analytics, ads, other embedded contents are termed as non-necessary cookies. It is mandatory to procure user consent prior to running these cookies on your website.