Hey crafty friends!  I’m back with another layout for the Southern Girls Challenge blog. I have honestly been so bad in the last year with making sure I was completing my commitments for them that I’m thrilled to be posting on time to months in a row.  Thanks for being patient with me Lou!  This month I made a multi photo Christmas scrapbook layout.

I had these adorable photos of my “nieces and nephews” that were in their families Christmas card.  I knew I couldn’t just toss them, and I don’t do double pages anymore so they all needed to somehow get on one page.  Can you believe I managed to get them all on there and with the amount of room left I also didn’t need to worry about much embellishing…win win isn’t it! 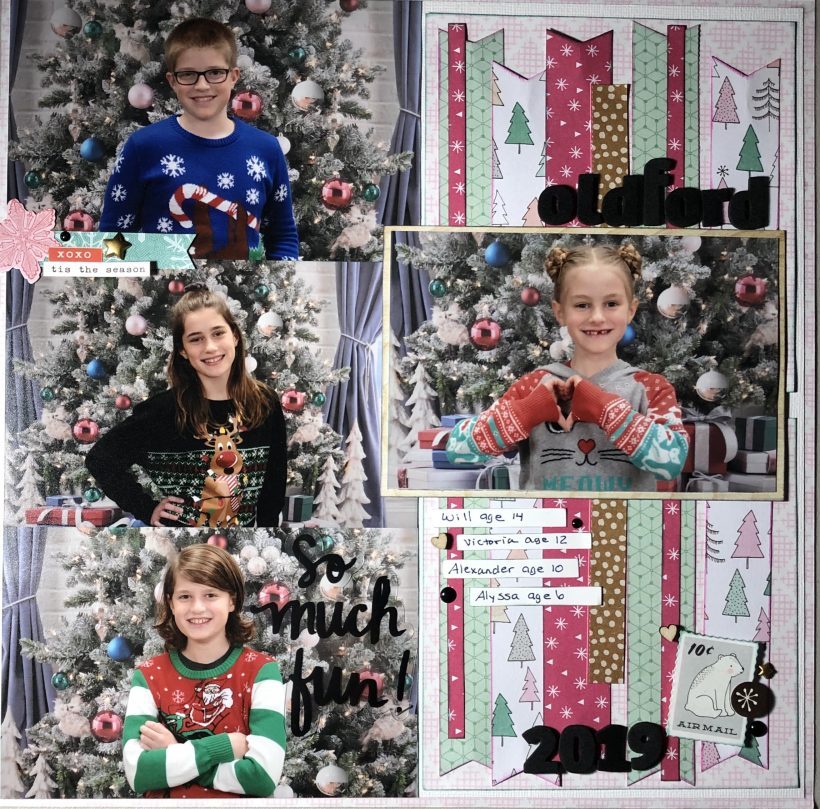 This project was also perfect for using a 6×6 paper pad on.  I have stopped buying 6×6 pads because I find I don’t use them frequently, but I have a ton still left from before.  With the way the photos are arranged on this layout the photo on the right made a perfect place to hide a seem.

I hope this gave you an arrangement idea for getting many photos on your layout and possibly using up some of your 6×6 paper sheets.  Be sure to pop over to the Souther Girls and enter your creations in the challenge.  Until next time….stay crafty!

Hey crafty friends!  Glad to be back again so quickly.  This time I have a long title scrapbook layout to share with you as part of the Scrap Our Stash Golden Group challenge for October.

As my nod to sing I used a long title which is a lyric from a Kane Brown song.  It’s appropriate for a picture of my hubby and I because I am a worry wart.  I always have a what if for every situation. He is the opposite and always says what if…that doesn’t happen or what if it’s actually good.  I’m so blessed to have that balancing force in my life. 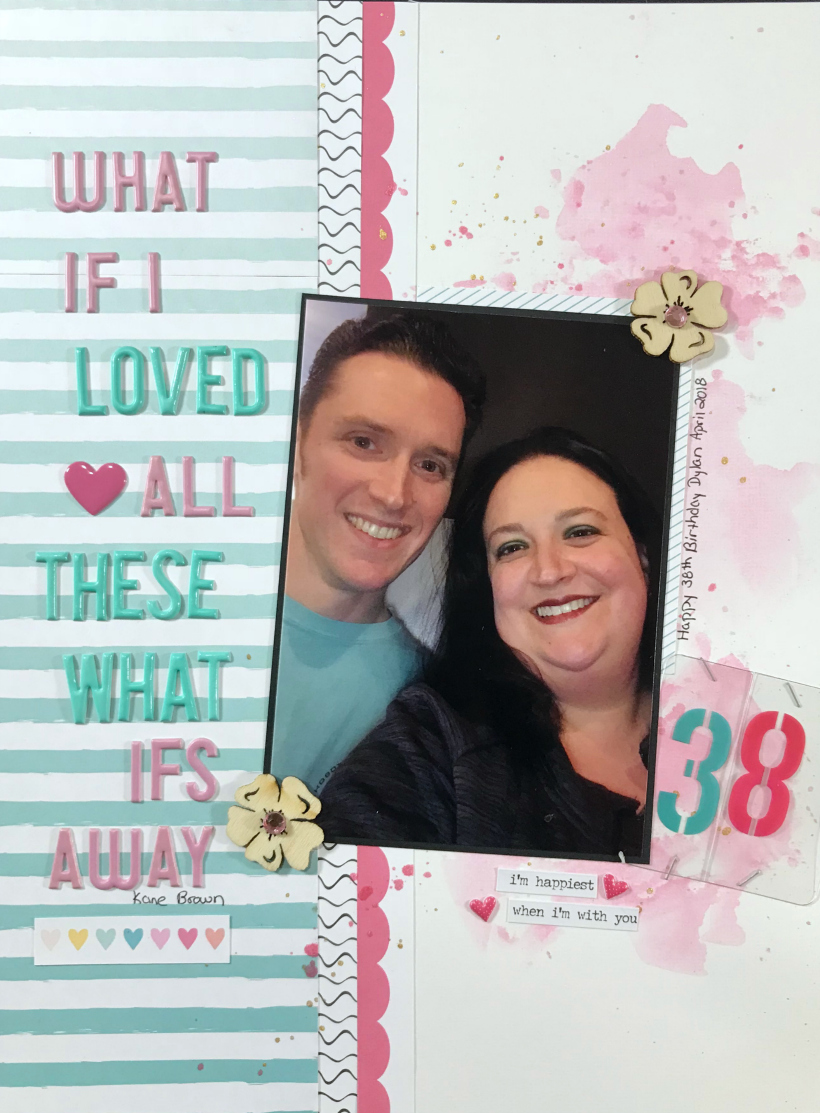 This kit is from Felicity Jane, and I will tell you it was gorgeous.  If I remember correctly it was the Felicity or Alexis kit.  The puffy stickers were my favorite piece.  I paired the kit with some simple mixed media using the packaging technique.  I did not use gesso prior to the mixed media and since I went light on the water there isn’t much warping thank goodness. I don’t remember where I got the wood flower, but they made a perfect home for a few rhinestones.

I really love how this came out.  The colors are some of my favorite to work with.  How will you interpret the Sing challenge?  Do you use long title?  Make sure to tell me in the comment below.  Until next time..stay crafty!

Hi Scrappy Friends!  I’m a bit late this morning, but I have another guest layout for the Use Your Stuff to share with you today. The challenge for this week is Bohemian with lots of rich patterns and embellishments.   I’ll be very honest…this was really a challenge for me. I am generally a clean and simple girl so what I tried to combine the two styles and I think I did ok! 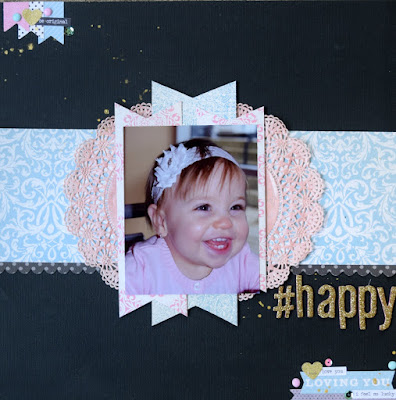 The base is American Crafts black textured yardstick.  I buy their big packs so I’m not running to the store every week for more base colors.  The patterned paper and embellishments are from the Carta Bella collection Amour. It’s a very french collection and the rich patterns suited the theme well.
The doily base is from Amazon, and you’ll probably see a ton of those on my layouts going forward as you have to buy them in packs of 1,000! White was too stark against the black background so I sprayed it with some Heidi Swapp Color Shine in Bush…it’s my favorite girl color lately.
The layout is finished off with some of my homemade enamel dots,  gold color shine splatters, gold thicker title (by Crate Paper) and some Tim Holtz tiny word stickers.
So tell me….did I mix enough to meet the theme!?

Happy National Scrapbook Day Scrappy Friends! I have the distinct honor of running one of the challenges for this weekend over on the Victoria Marie Facebook Group.  The challenge I came up with was to create a project with your top ten current favorite things.
I thought this was going to be super easy right…I mean we all have things we love.  When I actually sat down to plan though…super hard.  Narrowing your whole life down to ten things!  If you’ll notice though…work was not on the list…lol 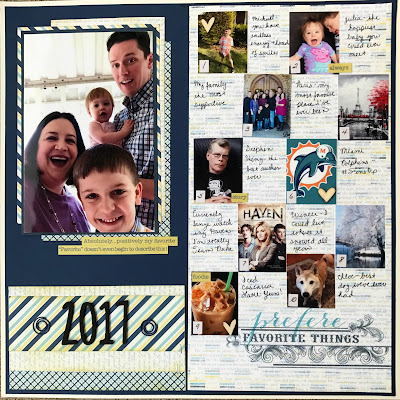 As per usual I started with a sketch…This one was from Creative Scrapper Volume Three.  The sketch had a huge amount of journalling on the right side, and I thought that was a great place for my top ten.
The paper on the right in from the Authentique collection all Favorite and was perfect for this theme.  The numbers and tiny word stickers are also from Authentique.
I didn’t care for the photo on the other pieces from the collection though so I pulled out a 6×6 pad from My Minds Eye called Moments.  The scrappy challenge of this was though that it was white and the Authentique is cream.  Tim Holtz distress pads in Antique Linen to the rescue.
If you’re not a member of the Victoria Marie group I hope that you’ll consider joining for loads more inspiration and new scrappy friends.
Hey Scrappy Friends!  I’m here today with a new to me product that I wanted to share with you because it’s changing the way I craft.  It’s the Embellie Gellie by ScraPerfect.
Previously I was using the following pick up stick produced by another company. 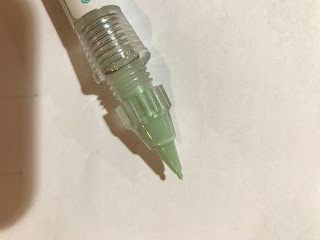 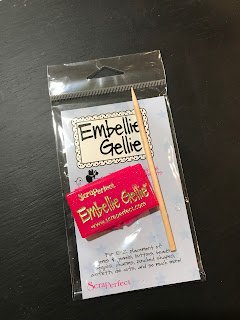 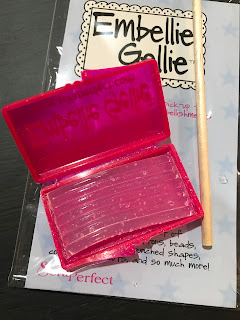 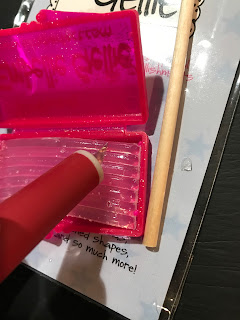 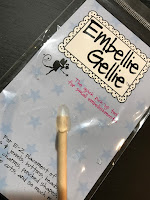 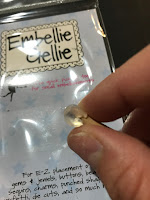 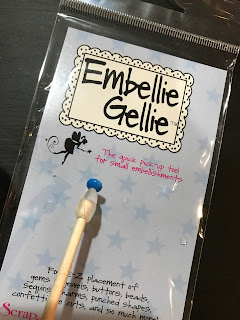 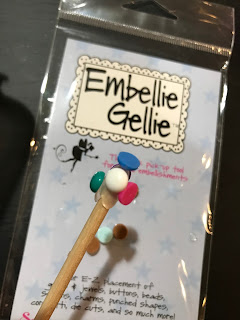